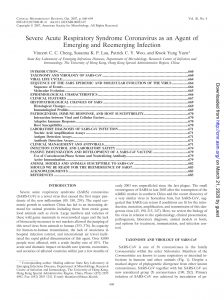 Severe acute respiratory syndrome (SARS) coronavirus (SARS-CoV) is a novel virus that caused the ﬁrst major pan-
demic of the new millennium (89, 180, 259). The rapid economic growth in southern China has led to an increasing demand for animal proteins including those from exotic game food animals such as civets. Large numbers and varieties of these wild game mammals in overcrowded cages and the lack of biosecurity measures in wet markets allowed the jumping of this novel virus from animals to human (353, 376). Its capacity for human-to-human transmission, the lack of awareness in hospital infection control, and international air travel facilitated the rapid global dissemination of this agent. Over 8,000 people were affected, with a crude fatality rate of 10%. The acute and dramatic impact on health care systems, economies, and societies of affected countries within just a few months of
early 2003 was unparalleled since the last plague. The small reemergence of SARS in late 2003 after the resumption of the wildlife market in southern China and the recent discovery of a very similar virus in horseshoe bats, bat SARS-CoV, sug-gested that SARS can return if conditions are ﬁt for the intro-duction, mutation, ampliﬁcation, and transmission of this dan-gerous virus (45, 190, 215, 347). Here, we review the biology of the virus in relation to the epidemiology, clinical presentation, pathogenesis, laboratory diagnosis, animal models or hosts,
and options for treatment, immunization, and infection control.

Previous PostCoronavirus: Why You Must Act Now
Next PostBat Coronavirous in China